'Tis the season for the company-endorsed, non-denominational, holiday celebration event, everybody! Most people say "bah humbug" to work parties, but I've always loved them. They gave me an excuse to talk to people I never get a chance to talk to otherwise (like those in other departments or even senior leadership).

I understand the unallure (what's the opposite of allure?) of those parties. People feel like they're full of fakeness and politics. And the awkwardness is palpable when Martin from HR decides to start a conga line, or Sheryl, the COO, thinks that it's the time to talk about how nobody appreciates what she does.

I used to be pretty awkward at work parties, until I realized some essential tricks that changed how I saw them. I won't waste your time with all the basics (don't talk too much about work, don't get hammered, and don't hook up with coworkers), because you can find a hundred lists talking about those.

These tips are for the introverts, the reluctant, and those that wanna get home a decent damn hour.

Look, you have to show up. You may hate the idea of mandatory fun. You may think that this is all a waste of time and money. And you may not be wrong. But, unless you're sick, have someone depending on you to take care of them, or are physically unable to get there, go to the work party.

People will be there, and here's the truth: not many will notice you're not there. But that's not a good thing. You want people to notice you, to remember you (in a good way), and to keep you in mind. That's how relationships form, both in your personal and professional life. And when people have a relationship with you, that's when interesting things happen.

#2 - Have a Conversation Starter.

This is my secret weapon. See, I'm great once I get some momentum in a conversation, but that opener is a pain in the ass. Always has been for me.

I'm sure I'm not alone. Ask any dating expert: the hardest part of talking to people is breaking the ice. But then I came up with a trick, and I've used it for years. This is what I wore to my last two holiday parties: 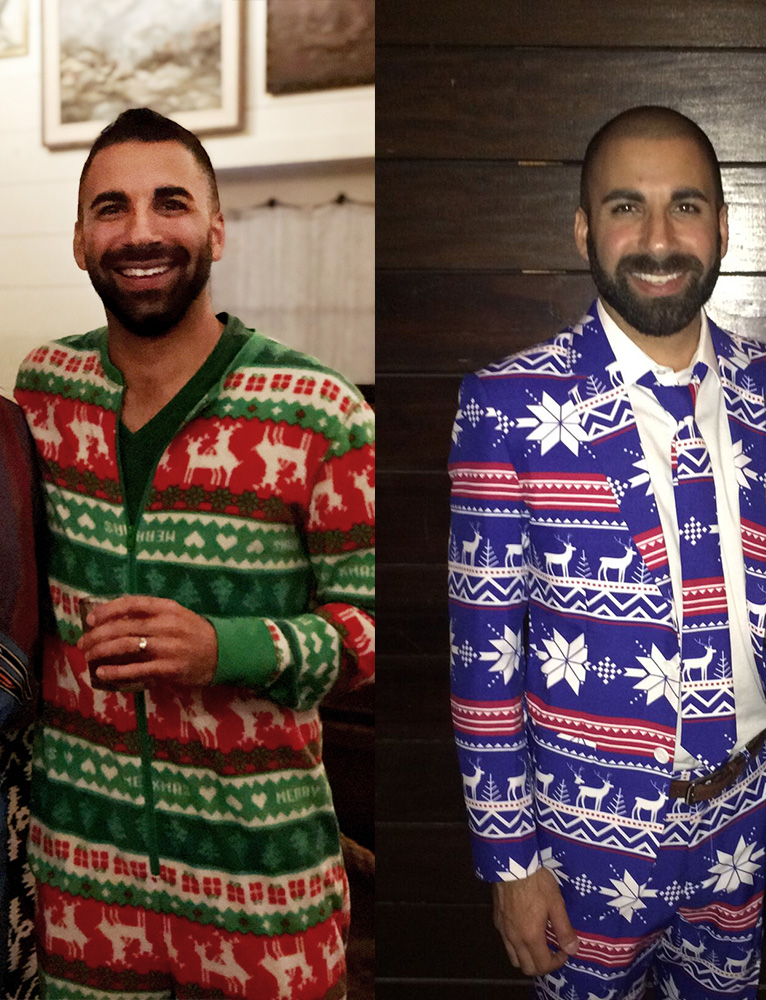 While the party on the left was ski lodge themed (so a onesie worked), the one on the right was a formal event (hey, it's a suit). And guess who batted an eye? Everyone.

Every time someone saw me, the first thing they'd say was, "Oh my god, I love your onesie!" or, "That's an amazing suit, where did you get it?" The suit, the onesie, they were the ultimate conversation starters. To the point that I didn't even have to start the conversation!

Now, I'm a creative, so it's okay for me to be dress little weird. And I'm not saying you have to dress up in crazy clothes to talk to people. But find something that stands out a bit, something interesting. It'll make your party experience so much easier, because you'll instantly have something to talk about with anyone. Plus, you'll have something they'll remember you by the next day, in their hangover haze.

Have you ever shown up on time to a real party? I used to think it was polite. Nope. Super lame.

Nothing's worse than walking into an empty room, sitting awkwardly with a cocktail in hand, waiting for the servers to set up the buffet. Leave being on time to the ones who are really looking forward to getting out of the office and into the open bar. Show up a little after it's started. But no more than an hour late.

Always make an appearance at the work party.

And leave early, before the party starts winding down. Because while arriving early seems lonely, being the last one there looks desperate. Last call's been made, the dance floor's empty, the karaoke guy has shut down. At some point, they'll ask you to help start cleaning up, and nobody wants to do that in a suit or heels.

And it seems obvious, but there's a rookie move people forget to do: say, "Hello" and "Goodbye" to the right people (the ones that will notice if you're there or not). Plus, there's no better excuse to chat up the powers that be and put a face to you name, than with a simple "Hi, thanks for putting this together!" They'll appreciate that you appreciated it.

If you're like me, this is all sounding terrifying to do alone. But I guarantee you, you're not alone in your lonely anxiety. The great thing is, alcohol helps with that. But you don't need to depend on that to gain some courage. Use the buddy system.

Of course, with a "plus one" you can spend the night using them as an excuse to find out people's names of people you never met (or forgot): "Hey, how are you? This is my friend, Anastasia." "Oh hi, I'm Bartholemew." Phew, I thought his name was Sigmund.

What you never thought you could do alone seems easy with a buddy.

But, say there's no "plus one." No problem. Find someone you kinda know already, maybe somebody you worked with or have an inside joke with. Or maybe somebody that looks as lonely as you. Make a friend. Then, you and that friend can combine your courage and attack the rest of the party head-on.

For a few parties, I kept getting caught talking to that one friend. Playing pool, sitting by the bar, finding a couch and chatting it up forever. Then, I realized that I spent three hours talking to someone that I already kinda knew, in a place that was already kinda like work. Make sure you keep moving around. You and that buddy could be a dynamic duo, or you could hop around solo.

There's this one guy I met who doesn't spend longer than five minutes talking to someone at a party. He has a few questions he likes to ask and then hops to someone else. His excuse: "Hey, I wonder if there's food here. I'm gonna go find some." Before he bolts, he gets the contact info of the person he was talking to, if they were interesting. Then, he bolts.

You don't need to stick to that tight of a timeline, but don't forget that this party is your opportunity to connect with people outside of the project you've been assigned. This is your chance to do that networking thing that you hate doing, but without looking like you're a desperate networker.

I've made this mistake a couple times. Never again.

You may hit it off with a group at the party. You may decide that leaving early means going to another bar or getting an ice cream cone somewhere. Okay, no problem with that.

But, whatever you do, don't go to that third place. The people that do are past the "hanging out" crew and into the "let's do this!" crowd. You don't want to be part of that crowd. That crowd has stories to tell and have stories told about them that never really reflect well on them at work.

Want some bonus points? Bring donuts. Not only will everyone love you for your dough-y generosity, but you'll have a chance to reconnect with some of those people you met the night before. Because who doesn't want to be welcomed in the morning with some donutty goodness?

It's Not Only a Party, It's an Audition.

Holiday work parties can be lame, if you let them. But don't look at it only as a chance to let off some steam, eat some free food, and enjoy the open bar. Look at it as an opportunity to get your face in front of people who never see your face.

And you can do that, no matter if you're an introvert, extrovert, or anywhere in between.

But remember, to do any of that, you've gotta show up.