Havas Chicago's CCO's Feelings Were Hurt By The Internet, So He Shamed His Employees

I don't normally post about industry gossip, but what's happened recently at Havas Chicago was way too insane to pass up (and amazingly, we can learn from their meltdown).

Now, you'd think I was talking about their tone-deaf, #fellowkids internal video. But no, this is so much worse.

Their Chief Creative Officer, Jason Peterson (insta @jasonmpeterson), went nuclear on his employees, publicly shaming those that spoke out about some issues they have with the agency.

Not only that, but somehow, they got AdAge to write an article, spinning the situation into Havas "fighting against bullying." (Read it here, if you can get past the paywall.) Looks like they've got some friends over there.

Looking for the TL;DR? Oh this is too good to shorten. Just buckle up.

There's this social media app called Fishbowl, where agency professionals can anonymously post as either their job title (ex: Creative Director) or their agency (ex: Havas). You can also post as your name, but only crazy people do that.

Anyway, recently on Fishbowl, lots of Havas Chicago employees were voicing some unhappy opinions about their CCO Jason Peterson, and the agency as a whole. Now, they were in no way kind about what they said, and in a lot of cases were downright offensive (as are all anonymous people on the internet). Most of them were like these two:
"The laughing stock in charge is obssesed (sic) with his 1M fake followers" and "I'm embarrassed to work at havas (sic) as well." 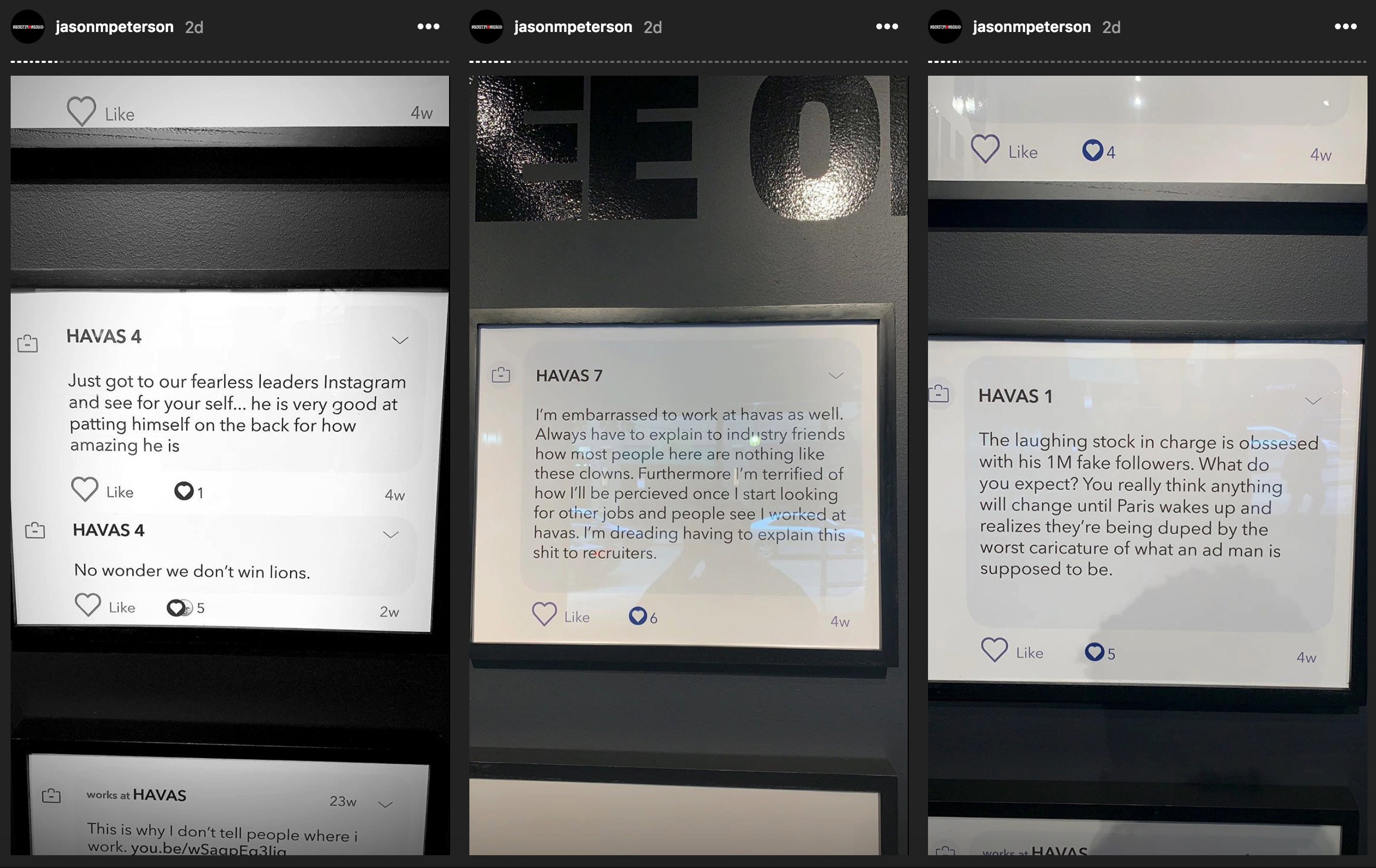 Now, this is where it gets interesting. According to AdAge, "some employees had the idea" (read: "yeah, this was totally Jason") that they should print out the most offensive of these posts, frame them, and hang them in the lobby of Havas Chicago, with the words "Employee of the Month" above them. Leadership was apparently thrilled at the idea and green-lit it. But, because they're so caring, they also printed pamphlets that basically said, "If you don't like it here, get out." alongside a list of other agencies' recruiters' contact info. 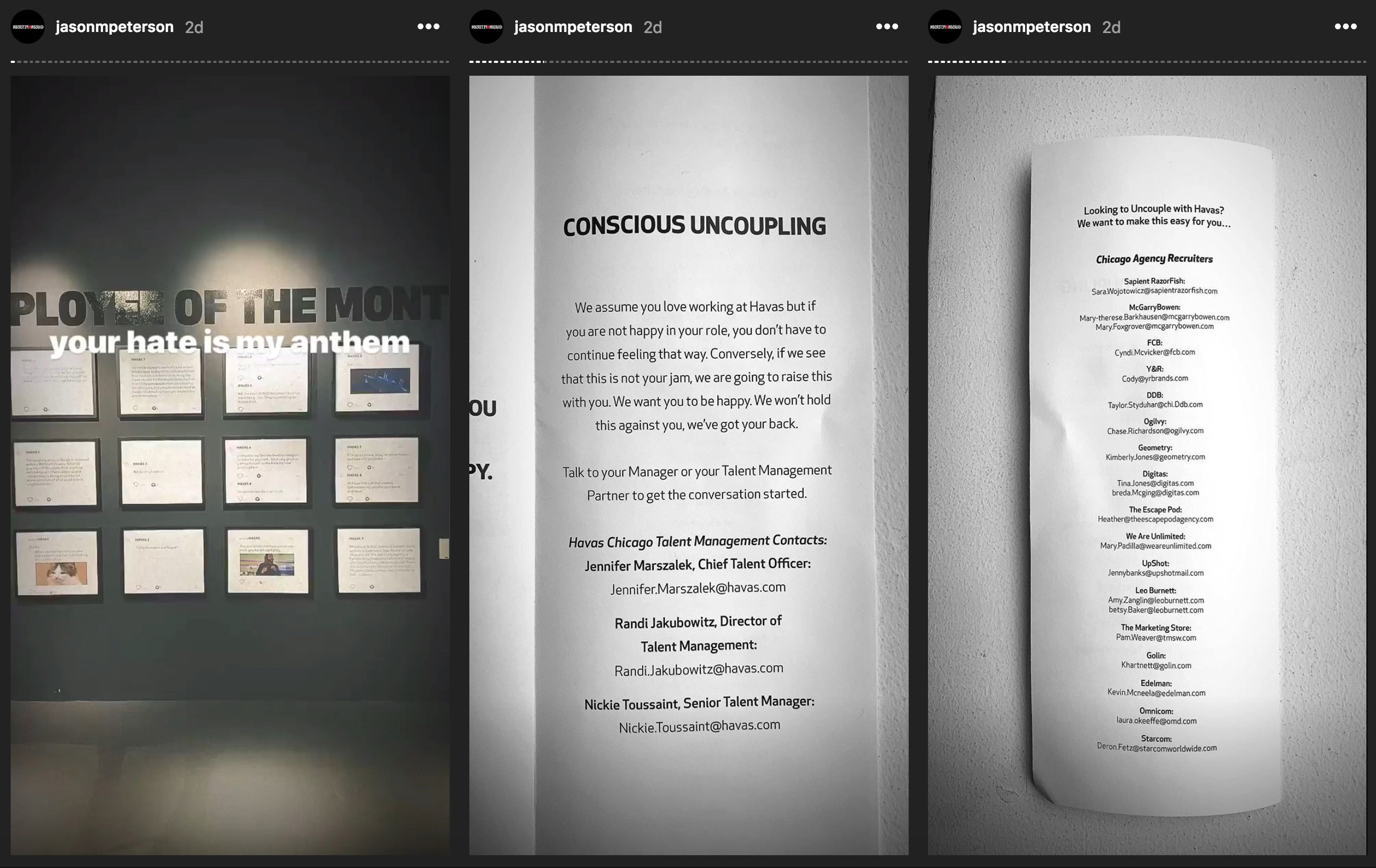 Oh, and of course the CCO put it all on his Insta Story, out to his 1.1 million followers.

I Don't Know Much, But I Know This

Now, I'm no CCO (yet). And I don't have all the answers as to how to run an agency. But, if you have employees that have a problem with you or the way you run your shop, what you should not do is shame them on Instagram and IN THE LOBBY OF YOUR AGENCY!

There's a lot I don't know, like how AdAge's journalist (name redacted, because I'm not doxing) could justify the article they wrote. But I do know a few things...and here they are:

1) The Boss Needs to Be the Bigger Person

Whether the negative comments were about Peterson's recent buddying-up with Kanye West, the agency's reputation, or just about how much they don't like their CCO, none of that matters. When your employees have turned to an anonymous social media app to vent, you don't take that and rub it in their faces.

You're the boss. Be the bigger person.

You're the boss. You don't know who said what. All you know is that people are unhappy, and your job isn't to piss more people off. It's to run a department where people feel valued and heard.

Obviously, these employees felt that the only place they could be heard was on an anonymous forum, amongst other industry folk. If that's the case, something is clearly broken at your agency.

Even if the idea came from other employees (which I'm incredibly doubtful about), it still had to get thumbs-upped from their leadership. That's where it should've stopped. Every person running that agency should've known better than to abuse their power, by shaming people who had issues with the agency.

Putting their own employees on blast, in the lobby of the agency they have to walk into every day, does not make them feel like they can talk to anyone about how they feel when their agency does stuff like...I don't know, frame and hang up anonymous venting posts in the lobby.

3) Get Some Thicker Skin

Okay, I'm no celebrity, but obviously I'm outspoken about my opinions. And there are people on Fishbowl that don't like me very much. Now, when they talk trash about me, do I think about looking for ways to digitally hunt them down and destroy their lives? Yes, of course, I do! But I don't actually ever do it!

Jason, if you want to be a public personality (and with 1.1 million insta-followers, you are), then you're gonna get haters. And if you let those haters get to you, you're not cut out for this game.

Were They Completely Oblivious?

It's shocking to me, how completely wrong of a call this was for Havas. Now, maybe one or two people thought it was a good idea, but for the entire leadership of the agency to green-light it is surprising. But, I have a feeling the saga isn't over just yet.

To those who got called out in the lobby of their own agency, maybe it wouldn't be a bad idea to move on. Not because you've been shamed into it, but because life's too short to deal with crap like this. 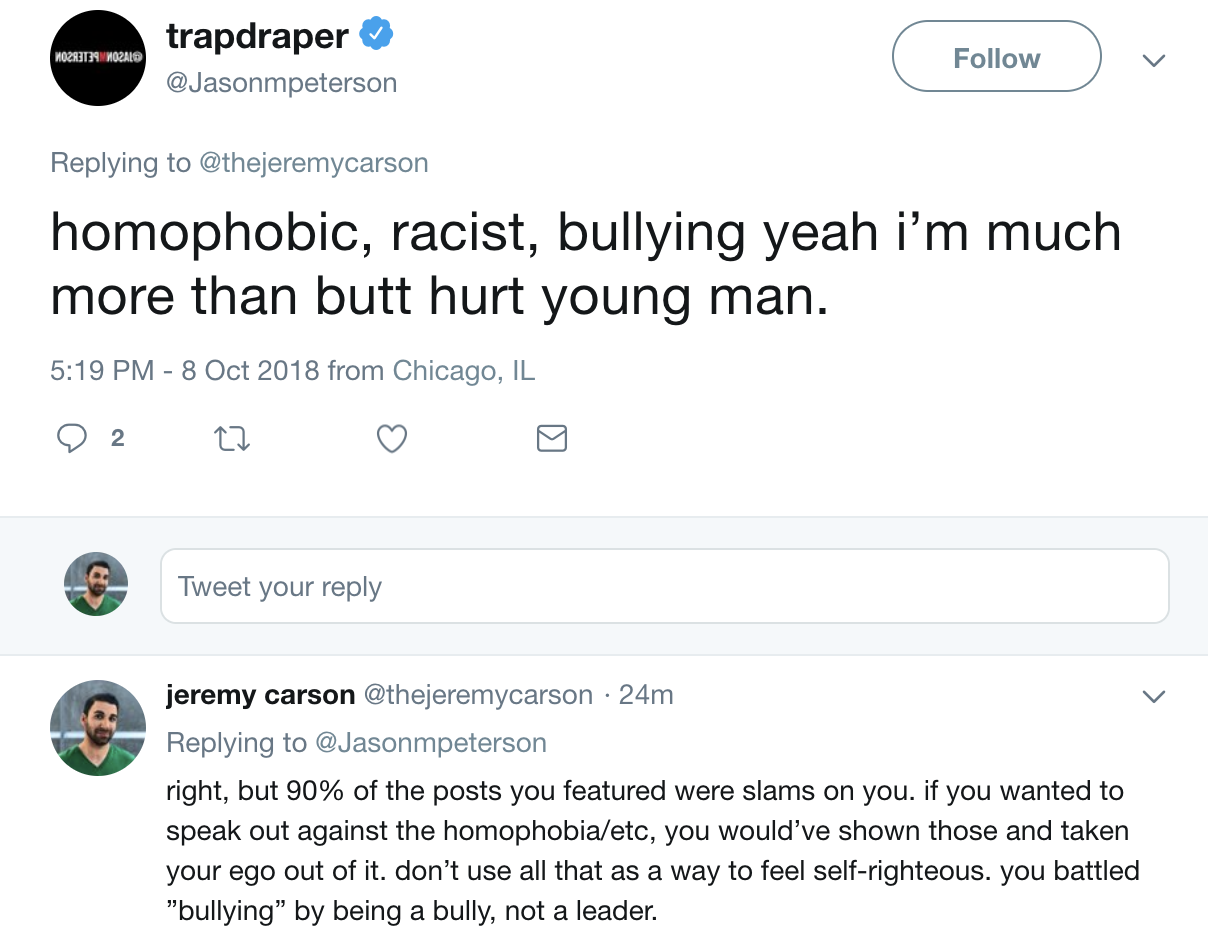